a pharmacist’s perspective on offering flu and strep testing 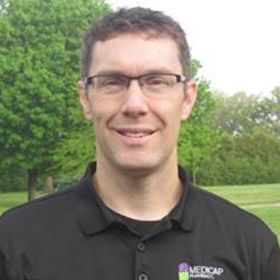 When Cardinal Health was looking for a pilot group of pharmacists to establish flu and strep testing in their pharmacy, Chris Meyer, RPh, PharmD, with Medicap Pharmacy in Austin, Minnesota expressed interest in participating. After overcoming some initial obstacles, Chris discovered not only was his pharmacy becoming a healthcare destination, but the service was also bringing in new patients and increasing cash flow.

We interviewed Chris and asked him to share his story. Read his testimonial:

Q: What were some of the obstacles you faced when you first started flu and strep testing at your pharmacy? How did you overcome them?

The first obstacle was establishing a good technique to swab the throat for strep testing and to swab the nasal passage for flu testing. I found really great demonstration videos online, and quickly became comfortable with swabbing.

I was also initially worried that people would not want to pay cash for the test and would rather go to an Urgent Care or Clinic to have the test performed and billed to insurance. Again, I was surprised that not one patient hesitated about paying cash for the test. They were very happy that I could perform the test and they could walk out with a prescription and over-the-counter needs in about 20 to 30 minutes.

Q: Have new patients visited your store to complete a flu or strep test? Please describe.

Q: Can you list three benefits you’ve seen as a result of offering flu and strep testing?

Increased cash flow. Younger patient base. Increased enthusiasm by the pharmacists and staff.

Q: What pleasantly surprised you about offering flu and strep testing in your pharmacy?

I am the most surprised at how appreciative my patients have been, and how much my patients are spreading the word to other community members about this great new service. My patients are even asking if we are going to expand into other testing and patient-care services.

Q: What different marketing tactics did you use in your community to make them aware you were flu and strep testing?

We sent a letter to a local daycare center explaining our service, and started running radio ads which I received great feedback on. We also advertised the testing on our pharmacy’s Facebook page, and we’re getting a tremendous amount of word-of-mouth marketing.

Q: What piece of advice would you offer another pharmacist that is considering flu and strep testing in their pharmacy?

Be brave. For our profession, this is a pretty invasive test and can be difficult especially with younger kids. Once you get past the first couple of tests, it gets easier and more patient-focused. If any fellow pharmacists have questions about getting into flu and strep testing, I encourage them to reach out to me – they will not regret adding this patient service in their pharmacy.